"The moon will guide you through the night with her brightness, but she will always dwell in the darkness, in order to be seen."
― Shannon L. Alder
"I am thou, thou art I... Thou hast turned a vow into a blood oath. Thy bond shall become the wings of rebellion and break the yoke of thy heart.Thou hast awakened to the ultimate secret of the Moon, granting thee infinite power."
― Lavenza (Persona 5)

Carrot (One Piece) transforming into her Sulong form under the full moon, giving into their feral instincts and gaining enhanced physical abilities. 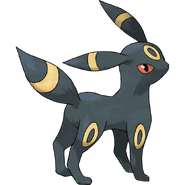 Umbreon (Pokemon) evolved from Evee via exposure to moonlight and it can also draw mysterious power from the moon.
Add a photo to this gallery
Retrieved from "https://powerlisting.fandom.com/wiki/Lunar_Empowerment?oldid=1513646"
Community content is available under CC-BY-SA unless otherwise noted.