The Moonlight Greatsword (Dark Souls series) and the Holy Moonlight Sword (Bloodborne), both swords that utilize the power of moonlight.

The ability to wield or create weapons with lunar power. Variation of Power Weaponry. Opposite to Solar Weaponry.

User can to create or wield weaponry power over the moon or moonlight, which grants the user of wide variety of moon-based abilities, including variable power with the phases of the moon and the ability to let out the moon's power with an attack. This ability is not only specific to mystic weapons, but also technologically advanced weapons. The power of the weapons depends on what they were created for or what level of lunar ability they posses.

Luna, the Moon Rider (DotA2) with her Moon Glaive.

Saïx the Luna Diviner (Kingdom Hearts series) can channel the power of the moon through his claymores.

Diana, Scorn of the Moon (League of Legends) fights with her Moonsilver Blade. 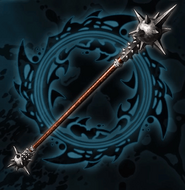 The Lunar Staff (Ninja Gaiden) is imbued with the moon spiritual powers, its power is at its strongest during the New Moon and Full Moon.

Artemis, Goddess of the Hunt (Smite)
Add a photo to this gallery
Retrieved from "https://powerlisting.fandom.com/wiki/Lunar_Weaponry?oldid=1513648"
Community content is available under CC-BY-SA unless otherwise noted.