Asmodeus (Abrahamic Faiths), Archdemon and Personification of Lust, and a Prince of Hell.

Be the source of all lust.

The user is the source of absolute/perfect/primordial lust in every living being everywhere, directly to cosmic/universal scales. Users being the binding existence together by the force/energy of lust. Giving the users instant and total dominion over all the powers of lust, dark desires, excitement, fervor, dark hungers, twisted libidos, longing, forced sensuality and sexuality, and a deep thirst that can never be filled. As long as they exist all that is lust and everything connected to it does as well.

If the possibility exists that user ever were to die or be killed, then everything about lust would cease to exist alongside the user, making everyone incapable of feeling or having lust thoughts, everywhere. 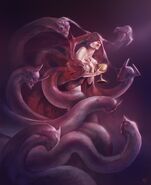 Babalon (Thelema)
Add a photo to this gallery

Retrieved from "https://powerlisting.fandom.com/wiki/Lust_Derivation?oldid=1674797"
Community content is available under CC-BY-SA unless otherwise noted.