Succubi and Incubi (Helluva Boss) can control the lust of humans in order to seduce them.

"To this torment are condemned the carnal damned. Those for whom desire conquered reason."
― Virgil (Dante's Inferno)

Users can sense and manipulate the lust of themselves, people, animals and other creatures, whether by increasing, decreasing, causing or otherwise channeling lust, even manifesting the emotional energy to physical level. 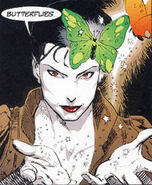 Desire of the Endless (DC Comics/Vertigo)