Elena Validus (Ben 10) can disperse into a swarm of nanites.

Transform into a swarm of machines.

Power to separate and disperse into a swarm of machines. Technique of Technology Manipulation. Variation of Scattering.

User can disperse their body into a swarm of machines (RC/mini vehicles, robots, nanites, drones, etc.), either single type or many different ones, scattering into large area while retaining control over their fragments instead of staying in relatively cohesive form and reforming from any part. 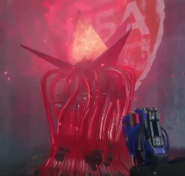 As a T-3000, John Connor (Terminator Genisys) could use his machine-phase matter to phase through people by scattering himself.
Add a photo to this gallery
Retrieved from "https://powerlisting.fandom.com/wiki/Machine_Swarming?oldid=1397022"
Community content is available under CC-BY-SA unless otherwise noted.