Become the embodiment of madness.

"Do not believe madness to be a curse, mortal. For some it is the greatest of blessings. "
― Sheogorath (The Elder Scrolls)

The ability to become the embodiment of madness. Variation of Madness Manipulation and Power Manifestation. Opposite to Logic Embodiment.

Users become the living embodiment of madness and insanity and gain the ability feed off of the insanity of everyone and everything including themselves. Users can convert madness into energy and use it as a full source to extend their own life span or as a weapon. They may never age and may be immune to death unless certain conditions are met. 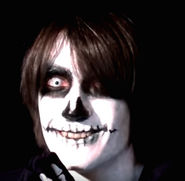 Skeleton Jordan (Jordan Underneath) is the embodiment of Jordan's weirder quirks and mad thoughts.

The Great Old One of Power (Soul Eater)

Xel'lotath, the Goddess of Insanity (Eternal Darkness) is the eldritch embodiment of madness and the source of insanity magick. 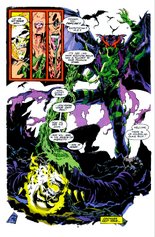 Dusk (Marvel) is a demonic entity of pure madness, it is said all who go mad will see him and even Nightmare fears his influence.
Add a photo to this gallery
Retrieved from "https://powerlisting.fandom.com/wiki/Madness_Embodiment?oldid=1578016"
Community content is available under CC-BY-SA unless otherwise noted.