The Wizard SHAZAM (DC Comics) is an all powerful master of magic and keeper of the Rock of Eternity.

The power to possess the traits of a Magic Lord. Variation of Mythic Lord Physiology and Primordial Mage Physiology.

The user either is or can transform into a Mage Lord, the greatest class of spell caster to ever exist. Not only are Mage Lords capable of controlling, manipulating, conjuring and mastering every form of craft in existence but also may hold a particularly powerful command over various mystics, be they Human, Undead, Bestial or even Draconian, etc.

A lord and master of magic can draw power from an infinite number of sources, be they physical, spiritual, divine, demonic or conceptual in nature. Unlike lesser spellcasters, they lack many of the limitations in the usage of magic due to being one with the arcane forces. 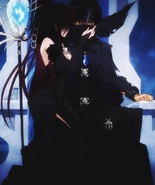 ...all earning him the title Pluto, the King of the Underworld.
Add a photo to this gallery
Retrieved from "https://powerlisting.fandom.com/wiki/Mage_Lord_Physiology?oldid=1519449"
Community content is available under CC-BY-SA unless otherwise noted.