Dr. Strange and Dormammu (Marvel Comics) attack each other with powerful and destructive magical energy bolts.

The user can create and project bolts of magic/magical energy and control the intensity/power of their projectiles, the bolts aren't weak but they aren't as powerful as a full powered attack. These bolts could be used to stun, burn, injure, or even penetrate/stab the enemy.

From possessing Dark Arts, the Fork Maidens (New Blood Interactive's DUSK) can cast out magical bolts from their hands to harm others. 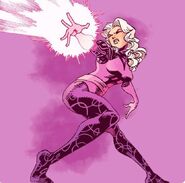 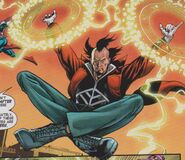 Alicorns (My Little Pony: Friendship is Magic)
Community content is available under CC-BY-SA unless otherwise noted.