Whereas the Holy Grail was the beginning of magic, its counterpart the Dark Grail (Once Upon a Time) was forged to be its end, being able to destroy magic.

"I am... well, I might as well say it. I am what my people refer to as a 'spellbreaker'. Spells simply vanish at my touch, enchantments fade, objects manipulated by magic return to their natural state. And given how often people rely on magic in my world, it is... problematic, to say the least. I was always told that it was a curse, something Azyrale gave me to punish my father for betraying his country and station. But I believe it may be a blessing."
― Aurem, We Are Our Adventuring Avatars

The user can utterly destroy magic, nullifying it to the point of non-existence, reducing the amount of magic in an area, and destroy entities made of magic.

See Also: The Magic Goes Away. 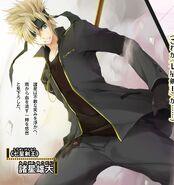 Yuudai Moroboshi (Rakudai Kishi no Cavalry) Blazer ability is the power to destroy magic and anything made from it.

Eclipsa, Moon, Star and Meteora Butterfly (Star Vs The Forces of Evil) invoking the whispering spell inside the realm of magic, forever destroying magic in the process.

Vaarsuvius (The Order of the Stick) casting and using Disjunction.

In his quest to destroy magic, Empirikul (Marvel Comics) destroyed many places and deprived many dimensions of mystical energies.
Português do Brasil
Community content is available under CC-BY-SA unless otherwise noted.
Advertisement