P. Russell (Charmed) was immune to witchcraft, spells and curses due to a protection amulet.

Be immune to magic.

"I don't know if I've mentioned this, but I am the morning star, the fallen one, the first and most damned child of creation. Magic is the power of creation, children. It cannot harm me."
― Lucyfar (Please Don't Tell My Parents I'm a Supervillain)

The power to be unaffected by Magic in any way. Variation of Selective Invulnerability and Power Immunity. Opposite to Science Immunity. Advance version of Magic Resistance.

The user is invulnerable to most, if not all, forms of magic and magical powers (magic absorption, incantation, etc.). Advanced users may be able to select which spells/curses or potions can affect them.

...as the Rank No.1, he was granted magic immunity through his Magic Immunity spell.

Asuna Kagurazaka (Mahou Sensei Negima) can cancel out spells that are cast upon her, preventing her from being affected by magic in any way.

Acnologia (Fairy Tail) being the Dragon of Magic is capable of being immune to any kind of harmful magic.

Dragons like Jake Long (American Dragon: Jake Long) is nearly immune to all forms of magic from other magical creatures, however they are still vulnerable to the magic of creatures older than them like the Gorgon’s stare and can only be affected by magic if it is amplified.

Ultimate Kevin (Ben 10: Ultimate Alien) is immune to magic/mana-based attacks as a result of absorbing the Omnitrix's sample of Geochelone Aerios DNA.

The Geochelone Aerios (Ben 10: Ultimate Alien) species, are species that are immune to magic/mana-based attacks. They can also select which spells can affect them.

The Power Pals (Fairly OddParents) are immune to magic due to their superpowers. 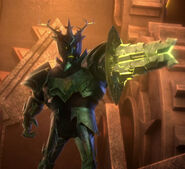 The Green Knight (Tales of Arcadia) dons a dark suit of armor that protects him from any magic attacks.

Jupiter Lee (The Life and Times of Jupiter Lee) has some degree of immunity to some magical effects, I.E. Sandman's sleeping spell.

Thanks to his willpower and the Ninja Suit, Randy (Randy Cunningham: 9th Grade Ninja) is immune to getting magically stank; getting turned into monsters; and is completely immune to the possession of the Chaos Pearls, something his magic suit can’t protect him from.

Thanks to the Slayer Handbook, D'Hoffryn (Buffy the Vampire Slayer) is immune to all magical attacks. 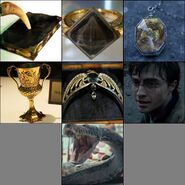 Horcruxes (Harry Potter) possess an immunity to most physical trauma, including most forms of magic, except for Fiendfyre.

As an intentionally made living horcrux, Nagini (Harry Potter) possesses a natural immunity to most magic. 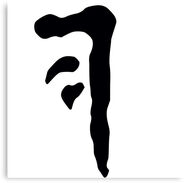 The Mark of Cain (Supernatural) protects the user from any type of demonic inspired spells.

Using the Light of the Soul, Oliver Queen (Arrowverse) is able to render himself immune to Damien Darhk's dark magic abilities like the life-absorption, by tapping into his inner light instead of his darkness.

Hansel and Gretel (Hansel & Gretel: Witch Hunters) being the children of the most powerful white witch, are immune to all types of black magic. 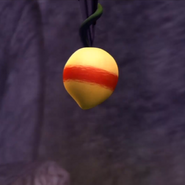 Immunity Berry (Barbie Fairytopia: Mermaidia) that causes whoever eats it to be immune to all magic past, present or future.
Português do Brasil
Community content is available under CC-BY-SA unless otherwise noted.
Advertisement