Arturia (Fate/Stay Night) is a Saber-class Servant; therefore, she has her class skill Magic Resistance to protect her by rejecting spells cast upon her.

Be resistant to magic.

The power to be resistant to Magic. Lesser version of Magic Immunity.

The user is resistant to most, if not all, forms of magic and magical power, possibly with ability to select which types of magics they are resistant to while others are may be restricted to a specific one.

Rubick the Grand Magus (Dota 2) can use his ability Null Field to give himself and allies magical resistance from enemy attacks. 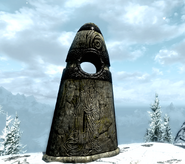 The Lord Stone (The Elder Scrolls V: Skyrim) blesses whomever activates it with enhanced armour and magic resistance.

Erza Scarlet's (Fairy Tail) armors such as the Flame Empress resist damage from the element the armor embodies, such as Fire magic. Additionally due to her prosthetic right eye, Erza is resistant to some forms of magic, such as Evergreen's Stone Eyes.

Rezkin (King's Dark Tidings) is resistant to most forms of magic with magic flames flowing past him and able to walk through wards without any harm coming to him.
Add a photo to this gallery
Retrieved from "https://powerlisting.fandom.com/wiki/Magic_Resistance?oldid=1752363"
Community content is available under CC-BY-SA unless otherwise noted.