The Kusanagi-no-Tsurugi (Japanese Folklore/Mythology), one of three Imperial Regalia of Japan, represents the virtue of valor.

Use magic via a sword.

The power to use magic/spells via a sword. Variation of Mystic Object.

User gains magical powers from a sword. They can be inherently magical, granting powers like spell-casting or augmentation, or act as an enhancement to the user’s own magical abilities.

He-Man (Masters of The Universe) possesses the virtually indestructible Power Sword/Sword of Grayskull. 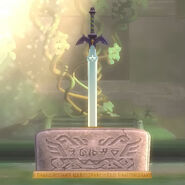 Solomon 72 Djinns (Magi: Labyrinth of Magic) can transfer themselves from their original Metal Vessels into swords, enchanting them to use their Almighty Genie Magic…

Holy Swords such as Excalibur and Durandal (Highschool DxD) were forged using divine enhanced magic and alchemy, granting them immense holy powers and various mystical abilities ranging from purification to spatial manipulation.
Add a photo to this gallery
Retrieved from "https://powerlisting.fandom.com/wiki/Magic_Sword?oldid=1662684"
Community content is available under CC-BY-SA unless otherwise noted.