Manipulate the magical powers/forces from any or all sources.

Users of this power possess and/or can utilize exotic otherworldly magical power; the user act as a link to these types of magic where they can utilize the extraordinary essences from said to fuel their magical powers and create all sorts of magical effects on various levels. This ability not only grants the user great strength and control over numerous variations of magical abilities, but also allows them to fight on par with, or possibly overwhelm powerful magical entities.

The user can access these pools of magic from any or all sources be they originated from divine and demonic forces, spiritual powers, different types of energy, and even supernatural origins like magical worlds, dimensions or planes of existence. The user can even absorb mana/magical energy from the surrounding environment.

The user has control of anything that is symbolized as magic and connected to magical beings. They are able to manipulate sacred objects and relics that are connected to magical entities and/or magic powers. With this, the user is completely considered worthy of mystical respect, allowing them to achieve feats that are impossible to be reached by normal standards. 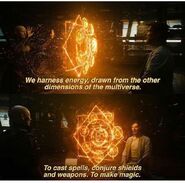 Masters of the Mystic Arts (Marvel Cinematic Universe) can use "magic," tapping into other dimensions to draw energy which they harness for various effects, including the Dark Dimension where the evil Dormammu resides.

The Realm of Magic (Star vs. the Forces of Evil) is an outside dimension where magic originates and travels to all dimensions through a series of ascending gold-colored waterfalls.
Community content is available under CC-BY-SA unless otherwise noted.
Advertisement