Create walls out of magic.

User can create walls from magic/magical spells or by shaping the existing matter or energy, they can shape the wall to shape they want, but afterwards the walls are unchanging and immobile. Depending on what the wall is made of, it can posses a variety of abilities and be very effective in both offensive and defensive combat.

Priest Arlock (Fairy Tail) can produce magic walls that are capable of stopping strong amount of brute force and magic attacks, he can even fire his own magic to phase right through the wall to hit his target. 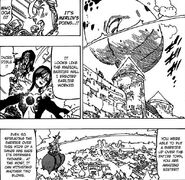 Merlin (Nanatsu no Taizai) puts a magical barrier above all Camelot.

Ultimate Ben 10,000 (Ben 10)
Add a photo to this gallery
Retrieved from "https://powerlisting.fandom.com/wiki/Magical_Wall_Generation?oldid=1654435"
Community content is available under CC-BY-SA unless otherwise noted.