With his Devil's Fruit ability of Magu Magu no Mi, Sakazuki/Akainu (One Piece) can combine his magma powers with his punches.

The user can infuse geothermal energy in his attacks, covering his fists, feet or even body in lava or throwing lava to their opponents. Although it is slow, the attacks can deal great damage on impact, burning the victim. 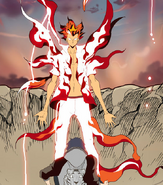