Create constructs made of magma.
The power to create tools, objects, weapons, armor, and even appendages out of magma. Sub-power of Magma Manipulation. Variation of Terrakinetic Constructs and Liquid Constructs.

The user can turn magma into tools, objects, weapons and other items, create semi-living constructs and/or create structures/buildings of varying permanence. Users who have mastered this ability can use it for almost any situation, creating anything they need.

Ghazan (Avatar: The Legend of Korra) is a powerful Lavabender who can make shurikens out of lava.

A stronger version of Zofis’ (Zatch Bell!) Oruga Radomu spell lets him create dragons made out of lava. 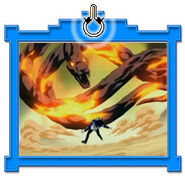 Rolan (Marchen Awakens Romance) activated his Stone Cube inside an active volcano and created a snake made of magma.

Sakazuki/Sakazuki's (One Piece) Inugami Guren (Dog Biting Crimson Lotus) a wave of magma, shaped like a dog's head, that he launches against his opponent.

Experiment 619 "Sploudyhead (Lilo & Stitch), create a monster made of lava.
Add a photo to this gallery
Retrieved from "https://powerlisting.fandom.com/wiki/Magma_Constructs?oldid=1518613"
Community content is available under CC-BY-SA unless otherwise noted.