The ability to seal magma into objects/beings. Variation of Elemental Sealing.

The user is able to seal magma within objects/beings and release them when needed, causing it to have various effects on the target. 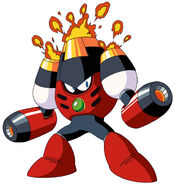 In creating the Robot Master Magma Man, Dr. Light sealed Lava powers within him, granting the Magma Bazooka.
Add a photo to this gallery
Retrieved from "https://powerlisting.fandom.com/wiki/Magma_Sealing?oldid=1481014"
Community content is available under CC-BY-SA unless otherwise noted.