Whenever Kiyo casts Maazu Jikerudon, Zatch (Zatch Bell!) creates a giant sphere of electromagnetic energy that moves towards the target and traps them inside while electrocuting them.

The ability to create and project balls of magnetic energy. Sub-power of Magnetic Attacks. Variation of Elemental Ball Projection and Energy Ball Projection.

The user can create and launch spheres of magnetic energy, immobilizing the opponent by magnetizing them to any magnetic surface or object and make the enemy more "attractable" by causing magnetic objects to fly towards them. 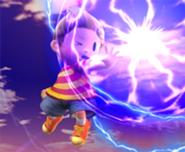 Polaris (Marvel Comics)
Add a photo to this gallery
Retrieved from "https://powerlisting.fandom.com/wiki/Magnetic_Ball_Projection?oldid=1490906"
Community content is available under CC-BY-SA unless otherwise noted.