Misaka Mikoto (A Certain Magical Index) uses her arm to serve as conductive rails for an arcade coin in order to fire her "Railgun" with via electromagnetism.

The user can use the pressure of magnetic fields to propel metal as projectiles.

Train Heartnet (Black Cat) uses the nano-machines in his body to generate static electricity for a very powerful Railgun shot, capable of piercing through and shatter many defenses. 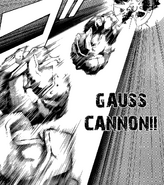 The Third Kazekage (Naruto) uses Magnet Release chakra to magnetically launching the Iron Sand Drizzle, a barrage of hardened grains, with a shotgun-effect.

Misaka Worst (Toaru Majutsu no Index) uses her Railgun to fire a magnetic rifle steel nails infused with electricity capable enough to pierce Accelerator arm.
Add a photo to this gallery
Retrieved from "https://powerlisting.fandom.com/wiki/Magnetic_Projectile?oldid=1546726"
Community content is available under CC-BY-SA unless otherwise noted.