User can to create or wield weaponry with power over magnetism, which grants the user a wide variety of magnet-based abilities, including possible extension to electromagnetism. This ability is not only specific to mystic weapons, but also technologically advanced weapons. The power of the weapons depends on what they were created for or what level of magnet-based ability they possess. 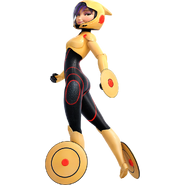 Go Go Tomago (Big Hero 6) based her armor's designs on her electromagnetic bike, including similar technologies.

Train Heartnet (Black Cat) is able to use the nanomachines infecting him to channel a railgun shot through his orichalcum gun, Hades. 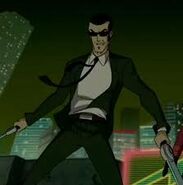 The Reapers (Mass Effect series) can utilize Thanix technology to make functional mass accelerators, propelling molten material at relativistic speeds to the point that they appear to be lasers.

Crying Wolf (Metal Gear Solid 4: Guns of the Patriots), with her equipped railgun on her battlesuit.

...and recalling them with magnets.

The Tau (Warhammer 40,000) have a host of rail weapons in their arsenal.
Add a photo to this gallery
Retrieved from "https://powerlisting.fandom.com/wiki/Magnetic_Weaponry?oldid=1415548"
Community content is available under CC-BY-SA unless otherwise noted.