Rapel (Godsfall), God of Magnetism, instructed men on the crafting of metal and draws power from all metal drawn from the land.

Become the embodiment of magnetism.

The power to become the embodiment of magnetism. Variation of Power Manifestation, Universal Force Embodiment and Magnetism Manipulation.

The user becomes a physical manifestation or personification of magnetism. As a result, the user has limitless control over and immunity to it. 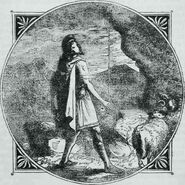 Magnes the shepherd (Greek Mythology), discoverer of magnetism, has his name act as the origin of the phenomenon.

Magnet Brain (Mighy Morphin Power Rangers) was created from Billy's polarizer by Lord Zedd as a manifestation of magnetic power.
Add a photo to this gallery
Retrieved from "https://powerlisting.fandom.com/wiki/Magnetism_Embodiment?oldid=1504875"
Community content is available under CC-BY-SA unless otherwise noted.