Max Eisenhardt/Magneto (Marvel Comics) is a master of this ability.

The user is able to generate magnetic fields.

Jiga (Naruto) can magnetize and demagnetize himself by tapping on his own forehead. 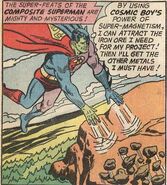 T-Bone (The Thundermans) has magnetic powers that allow him to pull anything like a magnet would attract metals, as he once dropped a satellite on his gym teacher's car.

Hector Harris/Metal Master (Surge of Power: The Stuff of Heroes)
Add a photo to this gallery
Retrieved from "https://powerlisting.fandom.com/wiki/Magnetism_Generation?oldid=1767577"
Community content is available under CC-BY-SA unless otherwise noted.