The power to rearrange the physiological features of oneself and others. Variation of Shapeshifting.

The user can modify the physiological features of oneself and others, including face, body, skin, or size (to a limited degree) to disguise or look like another person. While removing/concealing a body-part, like a finger, eye, etc., is possible, the user can't actually add anything new to the body-shape. They can, however, shift the flesh to a remarkable degree, although the changed being will always be recognizable as a member of their species. 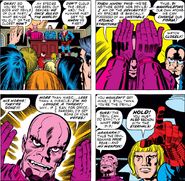 Nancy Downs (The Craft)
Add a photo to this gallery
Retrieved from "https://powerlisting.fandom.com/wiki/Malleable_Anatomy?oldid=1481058"
Community content is available under CC-BY-SA unless otherwise noted.