Anodites (Ben 10 series) are able to manipulate Mana, life energy and using it for various abilities, such as casting spells and preforming magic like limited Reality Warping or project an Astral Projection of themselves.

User can create, shape and manipulate mana, the impersonal source of energy that is both external and internal, existing in people, places and objects, and can be transmuted by the user into magical powers that yields upstanding results in both practice and combat.

Much like the ability of Life-Force Manipulation, the user is able to draw the energy from their surroundings. However, the ability of mana relies more on the use of different methods of magic such as spoken incantations and mystic items, like spell books, charms, talismans, weapons, etc. in order to achieve the effects that the user desires.

The user can use their mana reserve as a raw energy attacks.

The user can use their mana for defensive purposes.

The user can utilize the mana of nature to govern elemental forces.

The user can manifest mana with or around objects or beings in to provide intentional excess mana. The infusion is magically charged. It is normally temporary, but highly effective.

Healing mana can be given to a being who has lost mana in order to repair physical and mental infliction.

Users are able to use their mana to enchant their senses in order to mystically connect to the mana of others or objects. 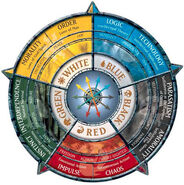 The Mana Wheel (Magic The Gathering)

Gwen Tennyson (Ben 10 Series) is able to manipulate mana to transform into an Anodite or preform magic which is far stronger than Hex or Charmcaster, but she is no where near as knowledgeable as either of them.

Ultimate Kevin (Ben 10: Ultimate Alien) possesses both Gwen and her Stone Creatures' mana ergokinesis after he drained it from them.

Witch Doctors' (Diablo) powers are based on Mana.

Gamera (Gamera film series) summons Mana Energy from the Earth, before unleashing it in the form of Ultimate Plasma.
Add a photo to this gallery
Retrieved from "https://powerlisting.fandom.com/wiki/Mana_Manipulation?oldid=1744675"
Community content is available under CC-BY-SA unless otherwise noted.