Asura (Asura's Wrath) posses the Mantra Affinity of Wrath. Because of this, his strength is proportionate to his level of rage and anger, allowing him to increase his power to nigh-infinite levels the more rage he builds up.

The ability to manipulate mantras. Divine variation of Sound Manipulation.

Monks (Diablo 3) have power Mantra abilities that can reduce damage, cause damage, heal or enhance the powers or physical conditions of oneself or others.

Chakravartin (Asura's Wrath) is the prime source of all Mantra in the Asura's Wrath Universe.

Augus (Asura's Wrath) though not interested in Mantra as his fellow Demigods are, he is utilizes his Mantra Affinity of Greed to extents that rivals Asura.

Wyzen (Asura's Wrath) can use the Mantra Reactor to increase his power a hundred times if not a thousand times over but at the cost of a ludicrous amount of Mantra. 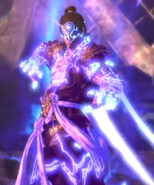 Yasha (Asura's Wrath) demonstrating the release of his aura of his Mantra Affinity of Melancholy.

Mithra (Asura's Wrath) has absolute control over Mantra, enabling her to use it to enhance the powers of other demigods.
Add a photo to this gallery
Retrieved from "https://powerlisting.fandom.com/wiki/Mantra_Manipulation?oldid=1276409"
Community content is available under CC-BY-SA unless otherwise noted.