Superpower Wiki
Register
Don't have an account?
Sign In
Advertisement
in: Powers, Mind Based Powers, Mental Power,
and 5 more

Convert countless beings to ones own way of thinking and feeling.

The ability to infect and convert a person to one's own thought process through psychoactive viral mental manipulation. Sub-power of Subordination Manipulation. Superior version of Hive Mind. Not to be confused with Higher Consciousness.

User can use a plethora of means to override the thought and feeling process of numerous sentient beings effectively and immediately turning said individuals towards the users mindset and drives. In essence making anyone and everyone who comes in contact with this power a mirror image of the user, whose mental and psychic capacities serving to strengthen and empower themselves.

This is accomplished via tactile effect taking place using a type of neural psychic virus which automatically converts most conscious and subconscious thought towards the wielders favor, as well as spreads from host to host collecting more & more minds into the link, collecting as many consciousness into one's consciousness.

Advanced users wouldn't even need to have physical content to override others thoughts and even learn to reverse the process removing them from the net, transferring various information to others, and even allow others to have there free will and personal thoughts restored completely and still be link to them without them knowing it, being able to live among free people and manipulate anyone the users wishes at will.

At the greater levels, users could have the entire world, galaxies, the universe or even entire cosmos under their mercy capable of doing just about anything, with this power users can rule, destroy, coexist, or do whatever users so wishes. 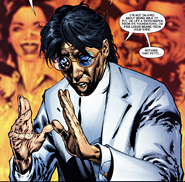 All Godhead (Wildstorm) needed to do was touch someone and they were immediately converted to his way of thinking.

Due in part to his having natural psychic talents, Cobi going by Starro the Conqueror (DC Comics) had the vast capabilities of enthralling several galaxies to his beck and call after a mother Starro latched onto him as a child
Community content is available under CC-BY-SA unless otherwise noted.