The power to expel portions of one's body mass for offensive purposes. Sub-power of Biological Manipulation.

The user can expel certain amount of their own body mass for offensive purposes. This ability is especially useful when the user is surrounded by a large quantity enemies and desires an expedient termination of their foes. Can be quite powerful and cause devastation to both nearby enemies and the surrounding environment. 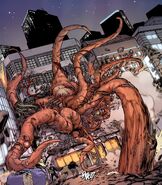 Kenji Uedo (Marvel Comics)
Add a photo to this gallery
Retrieved from "https://powerlisting.fandom.com/wiki/Mass_Expulsion?oldid=1504936"
Community content is available under CC-BY-SA unless otherwise noted.