The power to manipulate the mass of objects or entities. Sub-power of Molecular Manipulation.

The user generate/negate, shape and manipulate the mass of objects or entities, from dense to absolutely lightened while retaining their physical proportions. Users who can decrease their own mass can move easier through various environments and not worry about planetary gravitational pulls. 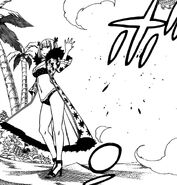 Brandish's (Fairy Tail) magic allows her to manipulate the mass of anything or anyone.

Harry Leland (Marvel Comics) possessed the ability to increase the mass of an object or person within 350 feet of him.
Add a photo to this gallery
Retrieved from "https://powerlisting.fandom.com/wiki/Mass_Manipulation?oldid=1106100"
Community content is available under CC-BY-SA unless otherwise noted.