"That was his first slide rule. He carried it with him all over preschool."
"And then I learned to do trigonometric functions in my head, like a big boy."
― Laverne Holt and Raymond Holt (Brooklyn 99)

The ability to understand quantitative conventions with little or no instruction. Variation of Intuitive Aptitude.

Users of this ability have intuitive understanding about math and capability to perceive and comprehend the fundamentals of probability. In any given situation, the user could calculate the accelerated probability and apply it in a predicament. Users of this ability are also able to determine the motion of a projectile through the work of physics.

Additionally users have the capability to solve patterns, find objects weak point (possibly through geometry), the ability to discern time and time zones, to enhance one's marksmanship through physics, understand and manipulate computational mathematics, and determine the distance between objects. 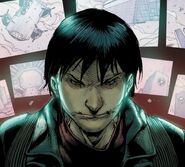 Coming into being as full-grown adults, the Grey Gentlemen (Momo) can do greater calculations without a calculator from the moment they exist.

A mathematical genius prodigy during his childhood, Ajuka Astaroth (Highschool DxD) became the Underworld's greatest mathematician, with his Demonic Power, Kankara Formula, Ajuka can manipulate the very laws of physics and mathematics to his will to rewrite reality.