Zone Users such as Taiga Kagami (Kuroko no Basuke) can use 100% of their concentration, enhancing their capabilities to their maximum potential.

"Homer, if I could write haikus while skinheads beat me with soap, I can concentrate anywhere."
― Sideshow Bob (The Simpsons)

The ability to fully use 100% of one's concentration. Sub-power of Maximum Brain Capacity.

User can utilize 100% of their concentration, allowing them to push their physical and/or mental capabilities to their maximum potential, allowing the mind to perceive and respond without any distraction, obstacles become minor problems while objectives grow significantly easier to accomplish.

Since concentration is the learning cornerstone, the user's mind also becomes quicker to assimilate thoughts and information, its user being now able to process information at instant speed. The information becomes instantly recorded on the user's memory, freeing the mind from its boundaries and making the stored knowledge accessible even when the user is without there power.

Alice Fuji (Arachnid) possesses the mental disorder Congenital Excessive Concentration, which allows her to use 100% of her concentration on a single thing at the cost of being unable to focus on anything else.

Akame's (Akame ga Kill!) greatest strength is her ability to concentrate she has honed as an assassin.

Using the Completed Super Saiyan Blue state requires Son Goku (Dragon Ball Super) to use 100% of his concentration in order to continuously contain the influx of ki within his body. 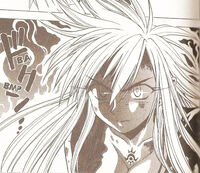 Rushuna Tendo (Grenadier) enters a Heightened State her concentration is at its most heightened in battle...

Masters of the Priestess Dance such as Kyou Kai (Kingdom) can enter into a deep meditative trance...

...which allows them to maximize their mental focus...

...to draw out the full strength of their body to perform superhuman feats of swordsmanship...

Due to severing all her emotional attachments, Yuu Ren Kingdom) could draw out the full extent of her strength and concentration without the need to induced herself into a trance.

By focusing completely on his target, Ou Hon (Kingdom) was able to maximize the precision and power of his Ryuu Shi/Dragon's Talon.

To win the arm wrestling match and avoid transforming dragon (because of watching handsome guy), Nina (Shingeki no Bahamut) blindfolds her eyes by a white cloth very tightly and exerts maximum concentration capacity.

Crowe Brust (Super Robot Wars Z) is able to utilize 100% of his concentration via the use of the Sphere of Swaying Balance.

Samus Aran (Metroid) summons and maintains her Power Suit by using 100% of her concentration.

James Ironwood's (RWBY) Semblance, Mettle, allows him to hyper-focus by strengthening his resolve, allowing him to carry through with his decisions
Community content is available under CC-BY-SA unless otherwise noted.
Advertisement