Coop (Megas XLR) is incredibly proficient in piloting his robot Megas with a video game controller.

Have extraordinary skill in piloting mechs.

The ability to have extraordinary skill in piloting mechs/mecha/giant robots.

The user has formidable skill in piloting mechs (giant robots) and are able to use the amazing arsenal at hand from either at a distance using a remote or a cockpit inside the machine.

Depending on the type of robot being controlled, the weapons, abilities, and equipment varies. In some cases the robot's power may be connected to the user.

The Ecto-Skeleton (Danny Phantom) was capable of amplifying Danny's ghost powers 100 fold, but at the cost of drastically exhausting his body. 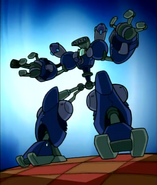 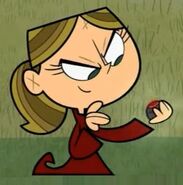 Despite being a small, petite girl, Heloise (Jimmy Two-Shoes) is very intelligent and sadistic as she makes inventions for Misery Inc. that would spread misery to her town and also likes to destroy things for fun.

The Vox Pilots, Muginami, Madoka Kyouno and Lan with their respective Vox Units (Lagrange: The Flower of Rin-ne). 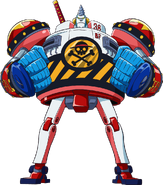 Franky's (One Piece) Franky Shogun is a gigantic robot created using state of the art technology designed by Dr. Vegapunk.

Koala (Rave Master) with His DarkBring Machinery can create robots and pilot them as well.

E-99 Eggsterminator (Sonic X) is a powerful robot mech created by Dr. Eggman. Being powered by six of the seven Chaos Emeralds, it was enough to surpass Sonic in both strength and speed.

Dandy (Space Dandy) makes up for his lack of proper combat skills by utilizing his mech, Little Aloha.

The Seven Dragon Paladins (Undefeated Bahamut Chronicle) are made of the strongest Drag-Knights from the seven different country. Including...

..and Malgialca Zen Vanfrick (Undefeated Bahamut Chronicle) the captain and number one in the Drag-Knight world rank.
Add a photo to this gallery 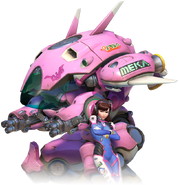 D.Va (Overwatch) is a master mech pilot despite being only 18 years old.

The Black Knight (Sly Cooper: Thieves in Time) is a mechanical mecha Penelope created who's using a rocket launcher… 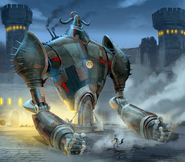 …and later upgraded with a laser and a shield.

The Nega Egg Wisp (Sonic the Hedgehog) is one of Eggman's final battle mechas.

DJ Octavio (Splatoon) pilots the Octobot King.
Add a photo to this gallery

The Power Rangers (Power Rangers) are well known for their various Megazords such as the Dinozord. Additionally the Super Sentai franchise that Power Rangers was based off of have a long standing tradition of using various mecha as part of each of their series.
Add a photo to this gallery
Retrieved from "https://powerlisting.fandom.com/wiki/Mech_Piloting_Intuition?oldid=1416824"
Community content is available under CC-BY-SA unless otherwise noted.