Tony Stark (Marvel) is always years ahead of the top inventors in his field.

Spider-Man (Marvel) is incredibly intelligent and has designed most of his own equipment and weapons, most notably his web-shooters and spider-tracers.

Manic the Hedgehog (Sonic Underground) has incredible skill in mechanics and computers. 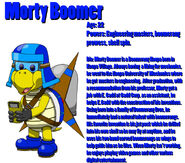 Franky (One Piece) is an outstanding engineer with vast knowledge of machinery.
Add a photo to this gallery
Retrieved from "https://powerlisting.fandom.com/wiki/Mechanical_Intuition?oldid=1053783"
Community content is available under CC-BY-SA unless otherwise noted.