The ability to morph and change by mechanical means. Sub-power of Technology Manipulation. Variation of Shapeshifting.

The user of this power can morph, change and/or shapeshift any sort of machinery or themselves (depending if they are machines as well). The change in mechanical structure can also give new enhancements or powers to the machines. 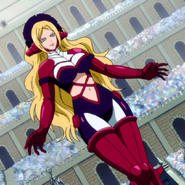 Jenny Realight (Fairy Tail) can use her Machina Soul magic to morph into different machines.

Using the Iron Fist of Arkus, Kaos (Skylanders) was transformed into a powerful robotic version of himself.

Metallo (DC Comics) after making a devils deal gained the ability to morph any metal or machinery he focused on into anything he wanted.

Ship (Ben 10) can morph into machines such as battle armor for Juile Yamamoto.
Add a photo to this gallery
Retrieved from "https://powerlisting.fandom.com/wiki/Mechanical_Morphing?oldid=1481138"
Community content is available under CC-BY-SA unless otherwise noted.