With the aid of the Big Gete Star, the Meta-Coolers (Dragon Ball Z: The Return of Cooler) posses the Rebirth ability, allowing them to repair any damage make sure whatever flaws in their design that allowed the injury are corrected.

Repair any damage by mechanical means.

"Perhaps I should have explained earlier? My body is constantly monitored by the Big Gete Star's main computer. Any injury I might suffer is instantly detected and repaired - and whatever flaws in my design that allowed the injury are corrected. It's quite remarkable, really. In simple terms, of course, this means you can't win."
― Meta-Cooler explaining the benefits of the Big Gete Star (Dragon Ball Z: The Return of Cooler)

"It might take a while, but Ultron's systems are designed to repair. As long as there's enough of him, he can always come back."
― Tony Stark explaining Ultron repairing systems (Next Avengers: Heroes of Tomorrow)

The ability to regenerate using mechanical machinery. Sub-power of Technology Manipulation. Variation of Regenerative Healing Factor. Not to be confused with Technological Healing.

Users can regenerate their body's mechanical parts via advanced technology, allowing them to repair any damages done to their mechanical structure and possibly improve their design. 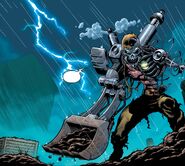 Metallo (DC Comics) can assimilate metallic and mechanical parts to reconstruct his body thanks to ability upgrades.

If he is ever broken apart, Dr. Ion (God Hand) can reassemble his body, and become equipped with a new weapon.

If the Fury (Marvel Comics) is damaged, it can use it's complex self-repair systems to regenerate.

Nimrod (Marvel Comics) can auto repair any damage to his armor and systems to an unknown extent.

The Dark Gundam's (Mobile Fighter G Gundam) self-regeneration systems allow it to recover from damage, no matter how severe.

Having acquired abilities and cells from the Dark Gundam, Master Asia's Master Gundam (Mobile Fighter G Gundam) gained the ability to repair itself from any form of damage.

Mukade (Naruto) regenerating his puppet body by applying the infinite Ryūmyaku chakra to it, repairing all damage.

Along with the using his hatred for the Cooper clan to fuel his immortality, Clockwerk (Sly Cooper series) posses an auto reconstruct circuitry to repair his body should it ever be damaged.

Whenever the Ravenous Octomaw (Splatoon) gets its teeth broken, it can replace them with a newer, stronger set of teeth.

Nanobot (Teenage Mutant Ninja Turtles 2003 TV series) is able to use its nano technology to regenerate itself from its smallest remnants.

During his fight with Brother Blood, Cyborg (Teen Titans 2003) became strengthened by his human spirit, allowing him to repair his damaged body with the part of Blood's drones.
Add a photo to this gallery
Retrieved from "https://powerlisting.fandom.com/wiki/Mechanical_Regeneration?oldid=1513741"
Community content is available under CC-BY-SA unless otherwise noted.