Electronic media can be embodied by the user of this power, as well as literary media.

User becomes the embodiment or personification of media, granting them limitless or near-limitless control over all media, whether it be television, the internet, the radio, or anything that is considered part of the media.

Internet (Monsters vs. Aliens) is an alien that runs the World Wide Web and is virtually the embodiment of his namesake. 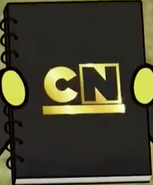 The Magic Notebook (The Amazing World of Gumball) is the physical representation of the Cartoon Network in the form of a notebook.
Add a photo to this gallery
Retrieved from "https://powerlisting.fandom.com/wiki/Media_Embodiment?oldid=1379336"
Community content is available under CC-BY-SA unless otherwise noted.