Phoebe (Charmed) communicates with the ghost of Charlene Hughes

"The living... may not hear them. Their voices... may fall upon deaf ears. But make no mistake. The dead... are not silent."
― The Sorrow, Metal Gear Solid 3: Snake Eater

"They can see us. That means they have "The Gift.""
― Miles Preston (The Haunted Thundermans)

The power to perceive and communicate with spirits and those who are in the afterlife. Variation of Interaction. Not to be confused with Death Whisper. Users of this power are often called Mediums.

User can hear and see/view ghosts/spirits of deceased and even communicate and/or interact with them, even if they have possessed inanimate objects/subjects/people. They are able to repel and run spirits away from an area, compel to employ an armada of ghosts, and may even view a visual conception of a spirit world in a trance if desired.

Well trained mediums are even capable of channeling the energy and powers of spirits making them potential host/conduits for channeling their powers through their bodies and manifesting their qualities for their own.

Kat (DmC: Devil May Cry) is able to see, hear, and interact with the Limbo dimension.

Johann Kraus' (Hellboy/BPRD) talent with this ability has increased thanks to his unique condition.

Hellboy (Hellboy/BPRD) communing with and having a card game with ghosts.

Wicked (Marvel Comics) can speak with ghosts and compel them to do her bidding. 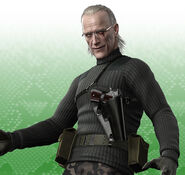 With his Immortality extended, Nathan (Misfits) develops a sub-power of this, as shown he was able to see his half-brother's ghost, but he didn't know it until Jamie told him that he was dead.

Jinchuuriki (Naruto) are known as Spiritualist Mediums able to communicate with their tailed beast within themselves and channel their powers through them.

Norman Babcock (ParaNorman) communicating with the ghost of his grandmother.

As a vampire, Vampirella (Vampirella) can see and communicate with ghosts.

Due to his Death-attribute magic, Vandalieu (The Death Mage Who Doesn't Want a Fourth Time) can communicate with the souls of the death without needing the 【Spiritualist】job.

Klaus Hargreeves/Number Four (The Umbrella Academy/Dark Horse Comics) can see and communicate with ghosts, including his late brother, Ben.

Like many shamans, Yoh Asakura (Shaman King) can communicate with ghosts and spirits.

All Supers (The Thundermans) like the Thunderman family have The Gift which allows them to see and hear ghost like The Prestons. Humans like the Hathaways family, are regular humans only get The Gift when they live in a Ghost’s Haunted House.

Joy with ghost Ronan O'Connor (Murdered; Soul Suspect)
Add a photo to this gallery
Retrieved from "https://powerlisting.fandom.com/wiki/Mediumship?oldid=1747766"
Community content is available under CC-BY-SA unless otherwise noted.