control a person's memories
The power to control memories of others. Also known as Mnemokinesis. A partial power of Mental Manipulation, not to be confused with Memory Reading.

One can control as well as modify, fabricate, suppress, influence, repair, restore, erase, detect, and view mental memories. The user can change memories to confuse, wipe away certain memories to cause amnesia, discern and provoke nostalgia, and enter the victim into a psychic vision replaying the memory. The user may effect their own memories selectively forgetting as they see fit.

• Amnesia is the psychic ability to selectively forget any information desired, by sheer force of will. This ability also allows avoidance of telepathic information gathering, as the user can decide to “forget” knowledge as soon as it is no longer needed (they could even elect to forget thoughts just because they find them unpleasant). Although, the information could not be recalled once forgotten (either the user subliminally stores it in the deepest recesses of his memory, so it can only be recalled by Hypnosis or the like, or the user’s mind literally deletes or puts out that information).

• Identity Erasure is a variation of Mnemokinesis (or rather, Memory Erasure) that allows one mentally erase memories of oneself from others’ minds. One with this ability could delete their name as well as memories or knowledge associated with them from the mind of any person with which they have had previous contact, as long as they are in close-enough range. One with this ability could use this to start a new life, or evade the pursuit of powerful foes. Sometimes, however, one may also be able to delete the identities of others (even from their own memory) or may have the ability Psychic Disguise.

• Memory Erasure, also known as Memory Wiping or Mind Wiping is the psychic ability to mentally delete the memories of others through a touch, a kiss or mental contact. When used to its max potential, this ability has no limit; the user could completely remove the short-term and long-term memories of others, leaving the victim in a comatose state, or preventing the use of superhuman abilities. This ability may be accompanied by Mnemonic Recollection (allowing the user to restore the memories he erases), although Rapid Regeneration or Healing work to do that as well.

• Memory Recollection, also called Mnemonic Recall is the ability to psychically bring things back to subjects’ memory. This ability negates Amnesia (both the ability and the condition) and Memory Erasure (it even combats the effects of Alzheimer’s and the like, so memory does not unnaturally deplete over time as it often does in old age). This can even bring back childhood memories, repressed memories, etc. However, this ability can also bring back painful memories in foes (or cause memory to sporadically act up, recalling sounds, smells or other experiences at inappropriate times) etc.

Panmnesia, also known as Hypermnesia or Total Recall is the psychic ability to easily remember and quickly recall everything that one has ever experienced or learned in one's lifetime. One with this ability usually needs only to read, hear or see something once and they will never forget it. They continually learn for the rest of their lives and their brain will simply compress neural synapses to contain it all, allowing memory of every event, experience or bit of knowledge from birth to the present. In addition, this ability may even be accompanied by the inability to have one’s memory altered, and immunity to the memory-numbing effects of drugs (a faculty called Anamnesis). 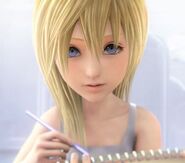 Naminé (Kingdom Hearts) is forced to control the memories of the protagonist Sora.
Add a photo to this gallery
Retrieved from "https://powerlisting.fandom.com/wiki/Memory_Manipulation?oldid=26213"
Community content is available under CC-BY-SA unless otherwise noted.