The ability to create tools, objects, weapons, armor, and even appendages out of quantum force. Sub-power of Quantum Manipulation and Quantum Energy Manipulation. Variation of Radiation Constructs and Universal Force Constructs.

Users can turn solidified quantum force into tools, objects, weapons, and other items, create semi-living constructs and/or create structures/buildings of varying permanence. Users who have mastered this ability can use it for almost any situation, creating anything they need.

User can create any item they have seen or can imagine and have a good idea of how it functions. Shortlist of possibilities includes:

Captain Atom (DC Comics) often utilizes his quantum nature in order to fabricate whatever he needs at the time. 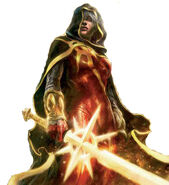 Phyla-Vell (Marvel Comics)
Add a photo to this gallery
Retrieved from "https://powerlisting.fandom.com/wiki/Mensiokinetic_Constructs?oldid=1505039"
Community content is available under CC-BY-SA unless otherwise noted.