Fuse several minds into one.

The power to assimilate and be composed by multiple minds all fuse into one. Variation of Unimind.

User assimilate any mind of any sentient being and add it to the users mind and enhancing their mental capabilities. By assimilating minds users own mind becomes more powerful and evolves to higher levels of power. 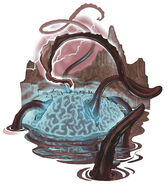 Hecatomb (Marvel Comics) is a sentient shiar superweapon that completely assimilates the minds of anything and anyone into itself, having done so on countless worlds and having assimilate literally billions of minds.

Legion (Marvel Comics)
Add a photo to this gallery
Retrieved from "https://powerlisting.fandom.com/wiki/Mental_Assimilation?oldid=1344400"
Community content is available under CC-BY-SA unless otherwise noted.