Anakin Skywalker, Yoda, and Obi Wan Kenobi (Star Wars) retain their consciousnesses after their physical deaths, keeping their identities/minds separate from the force.

"Your body submits, your heart succumbs... so why does your mind resist?!"
― Xehanort, Kingdom Hearts

"He's not dead. He just doesn't have a body anymore."
― Kate Corrigan on Johann Kraus, Hellboy/BPRD

The power to retain one's consciousness after the body dies.

User can keep their consciousness/mind living on, keeping it intact and going after their physical body dies/is destroyed/etc, allowing them to continue on as a being of pure consciousness, their will, identity, personality, etc, and power intact. 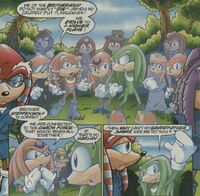 Due to their connection to the Chaos Force, the members of the Brotherhood of Guardians (Archie's Sonic the Hedgehog) retain their consciousnesses after their physical deaths, evolving to a higher plane and becoming part of the Next Evolution.

After falling into the Lifestream, Sephiroth's (Compilation of Final Fantasy VII) willpower was strong enough to keep his mind and identity separate from it. Even when his physical bodies are killed, his will and consciousness live on within the Lifestream as a kind of poison.

After her death at Sephiroth's hands, Aerith Gainsborough (Compilation of Final Fantasy VII) was powerful enough to retain her consciousness and sentience, keeping her mind and identity separate from the Lifestream.

Infinite Zamasu (Dragon Ball Super) is the surviving will and consciousness of Fused Zamasu left over from his destruction because of Future Zamasu's immortality. 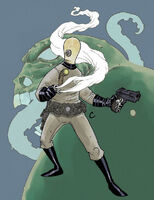 After his body was destroyed, Johann Kraus' (Hellboy/BPRD) mind and consciousness remained as an ectoplasmic entity, surviving through a special containment suit. 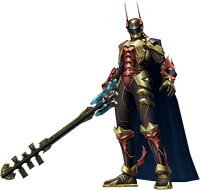 The Lingering Will (Kingdom Hearts) is the mind of the Keyblade wielder Terra, which took control of his discarded Keyblade Armor when Xehanort possessed his body.

After his defeat, Vanitas’ (Kingdom Hearts) thoughts, feelings, and will remained, taking form as the Vanitas Remnant.

Phantom Bison (Street Fighter V) is a form M. Bison takes after his body is destroyed, his consciousness living on in an incorporeal form through Psycho Power. Despite the lack of a physical body, his will and power remain intact.
Add a photo to this gallery
Retrieved from "https://powerlisting.fandom.com/wiki/Mental_Continuation?oldid=1618886"
Community content is available under CC-BY-SA unless otherwise noted.