Slaanesh (Warhammer 40k) was described to have a presence so mindblowingly beautiful that it was impossible for a mortal to look upon them without losing their soul and becoming a slave to the Prince of Pleasure's slightest whim.

Have an overwhelmingly hypnotizing presence.

The ability to have an overwhelmingly hypnotic presence which bends the minds of whoever gazes upon the user to their whim. Variation of Presence.

The user has an overwhelmingly hypnotic presence which bends the minds of whoever gazes upon the user to their whim, dominating beings around them and making them utterly enamored upon the user. They can hypnotically cause subjects to like the user, trust, respect even love them and become doting sycophants that will do anything to please them.

Anyone who sees or hears Jasmine (Angel) is automatically placed under her control. 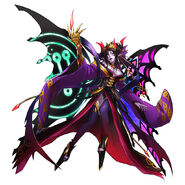 Lilithmon X (Digimon), the embodiment of Lust, has "Ultimate Beauty" which instantly captivates and enslaves anyone who looks at her.

Lilith (Valkyrie Crusade) has a mesmerizing presence, anyone who looks at her is totally mesmerized and becomes her captive.

Despite being physically ugly Gilly aka Gorgeous Gilly (DC Comics) can hypnotize any man to believe that she's the most beautiful creature in existence.

Jeanne d'Arc Alter (Fate/Grand Order) leading her soldiers into battle by terrifying them with her unnatural, unholy charisma. 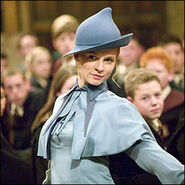 Veela & half-Veela hybrids such as Fleur Delacour (Harry Potter) are hypnotically breathtakingly beautiful almost to all male beings, which causes them to perform foolhardy and impulsive actions to get closer to, and to receive admiration from them