Galeem (Smash Bros Ultimate) was able to command an army of not only "Master Hands" clones, but also clones of the heroes and villains, the bosses, allies, NPCs, and every other beings in the universe, after wiping them out first.

The power to create and command all armies. Sub-power of Meta Summoning and Omniarch. Advanced variation of Army Manipulation. Technique of Absolute Life Manipulation and Authority Manipulation.

User can create, summon, or otherwise gain control to/over any/all armies, including real armies, fictional/imaginary ones, abstract/cosmic/transcendent beings/entities, gods, demons, the living, the dead, undead, spirits, amortals, beings with control immunity/negation, and/or even armies from other series/verses outside of the users own, etc; and control it unchallenged.

Some users can potentially even control armies that are or were created and controlled by someone else.

..the corrupted army of clones of all the fighters in the cosmos that he wiped out first. 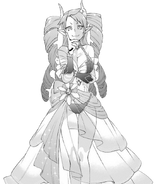 Hel (The Circumstances Leading to Waltrautes Marriage) controls not only all the armies of the living and dead in the Nine Realms, but she can summon and command armies of fictional characters from other verses/series outside of her own as well.
Add a photo to this gallery
Retrieved from "https://powerlisting.fandom.com/wiki/Meta_Army_Manipulation?oldid=1232535"
Community content is available under CC-BY-SA unless otherwise noted.