The Web-Spinners (Marvel Comics) spin the Cosmic Web, which controls, decides and links the fates of everything in existence from the lowest mortal to the most powerful transcendent beings.

"He defied the will of God, journeyed to the ends of the universe to escape the tyranny of the Plan. But predestination has no limits."
― Lucifer (DC Comics/Vertigo)

"In time, you will know what it's like to lose. To feel so desperately that you're right, yet to fail all the same. Dread it... Run from it... Destiny still arrives."
― Thanos (Avengers: Infinity War)

The power to manipulate all destinies/fates. Ultimate version of Destiny Manipulation.

User can perceive, shape and manipulate the destiny and fate of anything/anyone, including gods, demons, eldritch abominations, transcendent beings, entire worlds, universes and even realities. This allows them to control/decide anything and everything's destiny and fate.

Some users may even be able to manipulate the destinies of users of freedom as well. 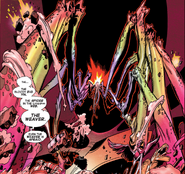 The Weaver (Marvel Comics) is arguably one of Legion's most powerful personalities, able to manipulate the fate of reality as a whole.

Eternal Fortuna (Valkyrie Crusade) as the goddess of fate, has absolute control over the fate of anyone/anything.
Add a photo to this gallery
Retrieved from "https://powerlisting.fandom.com/wiki/Meta_Fate_Manipulation?oldid=1505082"
Community content is available under CC-BY-SA unless otherwise noted.