As the goddess of doom and misfortune, Beshaba (Forgotten Realms) can curse anyone with bad luck so overpowering that it can potentially follow them beyond the grave.

"Give me frogs! Flies, locusts! Anything but you. Compared to you the other plagues were a joy!"
― Terrence Bey (The Mummy)

The power to have infinite misfortune. Sub-power of Meta Probability Manipulation. Advanced version of Jinxed. Opposite to Meta Luck.

User is cursed with misfortune so great it bends the nature of reality, making them the ultimate jinx. They are so unlucky that causing spontaneous natural disasters to occur wherever they go is considered on the low end of how bad their luck is. Examples of their limitless misfortune include causing hordes of undead rising from their graves whenever they walk by a graveyard/morgue, create calamity and chaos to their society, destroy everything around them, turning good luck charms into cursed/defiled objects, causing sudden and spontaneous deaths, etc. Their luck is so bad that Luck Erasure only reduces the severity of it, rather then remove it entirely.

Their luck may be so terrible that not even death can release them from it, causing it continue on with them in the either the afterlife or the grave or simply curse them to live forever, forcing them to live with their unfortunate situation for all eternity. 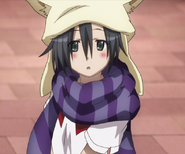 Also known as Reaper, Asebi's (Ben-To) bad luck is infinite, as not only can she infect others with it like a disease/virus, but lucky charms actually begin to corrode if she touches them or they become cursed. Her misfortune can even cause paradoxes and change the basic nature of things that she interacts with, making her the ultimate jinx.

Sheriff Murphy (Milo Murphy Law) is both the original murphy and the origin of Murphy's Law, which is considered to be a fundamental law of the universe that effects everything, including the space-time continuum in his case.
Add a photo to this gallery
Retrieved from "https://powerlisting.fandom.com/wiki/Meta_Jinx?oldid=1559122"
Community content is available under CC-BY-SA unless otherwise noted.