Medaka Kurokami's (Medaka Box) existential weight is so huge it bends the very laws of reality.

"The probability of success was zero percent. But I've learned that probabilities are meaningless when it comes to you guys."
― Lord Genome (Gurren Lagann)

The power to have infinite luck. Sub-power of Meta Probability Manipulation. Advanced version of Luck. Opposite to Meta Jinx.

User is blessed with levels of luck so great that it bends the very structures of reality, constantly rearranging them to their advantage, whether they want it or not. Their luck affects them to the point where probability means nothing, as in they are immune and unaffected by the laws of causality, live life without consequences, are fated for wealth and riches, forge their own paths to whatever their heart's desires and fulfill their every wish, etc. This allows users amazing success in all activities and aspects of life, to surpass the most impossible odds, conquer the most difficult of tasks and trials, and even defeat the most unbeatable opponents.

Their luck may be so powerful that no force within their universe or reality can take it from them, not even death, allowing their luck to be carried on into the afterlife or into their next life if or when they pass on. Luck Erasure will only reduce its effectiveness temporarily, rather than permanently removing it entirely.

Doreen Allene Green/Squirrel Girl (Marvel Comics) can triumph even in the most impossible scenario.

Medaka Kurokami (Medaka Box) can stop a surprise point-blank burst of machine-gun fire in the face with her mouth - via a martial art trick. 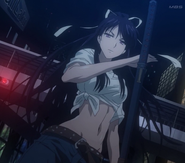 Kanzaki Kaori (To Aru Majutsu No Index) is one of only 20 Saints in the world. She has the uncanny ability to succeed in no matter what she does.

Lucky Ten's (Valkyrie Crusade) luck is essentially unlimited, to the point she never had to make an effort in her entire life, and don't even know what an effort is.

Nagito Komaeda (Danganronpa 2: Goodbye Despair) the Ultimate Lucky Student, chosen by Hope's Peak Academy through a nation-wide lottery.
Add a photo to this gallery
Retrieved from "https://powerlisting.fandom.com/wiki/Meta_Luck?oldid=1465360"
Community content is available under CC-BY-SA unless otherwise noted.