Owen Reece/Molecule Man (Marvel Comics) can control matter of any shape and form.

The power to manipulate any/all types of matter. Sub-power of Omni-Manipulation. Perfect version of Matter Manipulation.

The user can create, shape, manipulate, summon, destroy and customize all possible forms of matter, whether organic or inorganic, baryonic or non-baryonic, etc. This also extends to “exotic matter”, such as dark matter; antimatter; tachyons; and other highly theoretical forms of matter.

They can manipulate matter from alternate timelines, dimensions, universes, etc., using their immense power to pluck it from one of the aforementioned categories and materialize it to their location. Along with this, the user can also create new types of matter and imbue them with properties of their choosing, creating matter not of the normal variety. For example, a user could create matter that grants powers to its wielder or matter that has properties or a structure that defies the established laws of physics.

At their strongest, the user can manipulate quantum foam, the smallest level and foundation of reality as we currently know it. 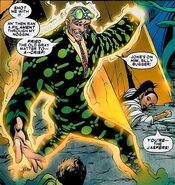