"The moment you’re ready to quit is usually the moment right before a miracle happens."
― Nao Tomori (Charlotte)

"The Holy Right's strike that ends everything it touches and reaches anything when swung uses the Miracles of the Right Hand to create the most favorable outcome. The right hand adapts to the obstacles and hardships it must face regardless of its target's power, speed, distance and numbers. The strike then chooses the most suitable method of destruction to match the enemies difficulty and manifests it without using destructive force"
― Fiamma of the Right (Toaru Majutsu no Index)

"Wishing to bring back to life that which no longer exists. At that point, you're not using magic. You're asking for a miracle."
― Personification of Cinderella (Märchen Mädchen)

The ability to manipulate the ultimate miracles. Form/Expression of Omnipotence. Perfect version of Miracle Manipulation. Technique of Author Authority. Opposite of Meta Disaster Manipulation

User can create, shape and manipulate the ultimate miracles. No matter how hopeless the situation, this power will overcome and solve it, zero percent chance of success means nothing to this ability and any obstacles facing it will be crushed.

This can be either the work of a Supreme Being who is trying to save their creation from certain doom or a character who has written themselves into a corner and needs a way to finish the story.

It's best to think of this ability much less as a power and more as an event.

Any power that is needed to accomplish the task no matter how hopeless the situation:

Dex (Fables) is the personification of the Deus Ex Machina. As such he has the power to make anything happen. However until it is time, his true power will not be showcased.

Because of his weapon of choice "The Deus Ex Sewing Machina", Godhead Pickle Inspector (Problem Sleuth) can overcome and solve the most dire of situations when there is no chance of success.

After dying on the cross, Jesus Christ (Christianity) had re-forge the connection between God and humanity. Saving humanity from their sins and providing a way to paradise and eternal life...

He will also be the one to appear during the end times and defeat the forces of The Beast and rescue the few remaining believers and establish his kingdom on Earth. 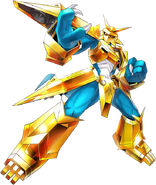 Magnamon (Digimon) is able to use the power of the Digi-Egg of Miracles to overcome any predicament.
Community content is available under CC-BY-SA unless otherwise noted.
Advertisement