Planar Shepherds (Planescape) can draw on and command nature anywhere/everywhere across the infinite planes. Including being able to control, generate, and shape nature in places that its physically impossible for it to exist or that would normally destroy/erase it.

Manipulate all of nature.

"The Creator had made the world and then left humankind to make of it what they would, a heaven or the Pit of Doom by their choosing, The Creator had made many worlds, watched each flower and die, and gone on to make endless worlds beyond. A gardener did not weep for each blossom that fell."
― The Creator (Wheel of Time)

The power to manipulate nature of all realities. Ultimate version of Nature Manipulation. Sub-power of Nature Lordship. Not to be confused with Meta Environment Manipulation.

User can manipulate Nature and all aspects of it of all places, realities, dimensions/realms, times, universes, etc. Regardless if its a physical location such a higher dimension/plane, heaven, hell; or a metaphysical/conceptual one (ie a dream/dream world, an illustration, a complete void, in-between or outside fantasy and reality, an illogical/paradoxical world).

Users can command nature anywhere, even in places that nature doesn't or can't exist. Allowing them to utilize nature and all it aspects freely despite whatever differences the location/time/place (or lack thereof) has that may prevent it from flourishing or that would destroy/erase it.

They can create or shape nature/natural effects that can affect even incorporeal metaphysical life forms who are normally at/from an alternate plane of existence, such as oneiric/dream entities/beings, ghosts, deities, and more. 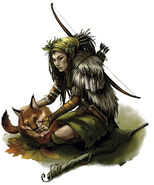 Rillifane Rallathil (Forgotten Realms) commands all of nature everywhere and everywhen across all planes and universes, as his roots are interlinked with every plant, environment, season, and natural aspect/force that there is. Even connecting to the nature domains of other deities in their personal dimensions.
Community content is available under CC-BY-SA unless otherwise noted.
Advertisement