Carl Creel/Absorbing Man (Marvel Comics) can absorb anything he pleases.

Power to absorb and utilize metal in some way. Technique of Metal Manipulation. Variation of Earth Absorption.

The user can absorb metal, while removing it from the source, into their body and use it in various ways, gaining some form of advantage, either by enhancing themselves, gaining the drained power, using it as power source etc., either temporarily or permanently. 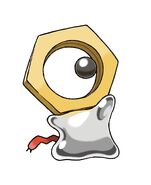 Meltan (Pokemon) loves metal so much that it absorbs it in its body.

White Monster (Teen Titans)
Add a photo to this gallery