The power to infuse metal into objects (usually a weapon), beings, or powers. Sub-power of Metal Attacks. Variation of Earth Infusion.

The user can infuse metal into objects (usually a weapon), beings, or powers, empowering and energizing them and allowing the user to manipulate their qualities and efficiency. 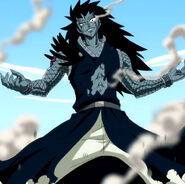 Bullseye (Marvel Comics) has had strips of Adamantium fused to his skeleton and spine, making his bones virtually indestructible.

As a result of the Weapon X experiments, James "Logan" Howlett/Wolverine's (Marvel Comics) skeleton and claws have been infused with Adamantium, rendering them nearly indestructible and able to cut through virtually anything.

Like Wolverine, Lady Deathstrike's (Marvel Comics) claws and skeleton are infused with Adamantium.

Undergoing a similar process like her "father", Laura Kinney/X-23's (Marvel Comics) claws were infused with Adamantium.

Using Iron Tail, Ash's Pikachu (Pokémon) infuses his tail with steel to deal a powerful strike.
Add a photo to this gallery
Retrieved from "https://powerlisting.fandom.com/wiki/Metal_Infusion?oldid=1382600"
Community content is available under CC-BY-SA unless otherwise noted.